Got my first lot of proper nicotine patches today (they don't go out of date until 2013), I'm on the Stage 1 ones and I'm craving harder then when I was wearing the Stage 2 patches. What's that all about? To distract myself from cravings and the stress of the 4th round of the FA Cup I tarted up some plugs with some posh nail polish. Well, poshish, it was 99p from Fleabay. 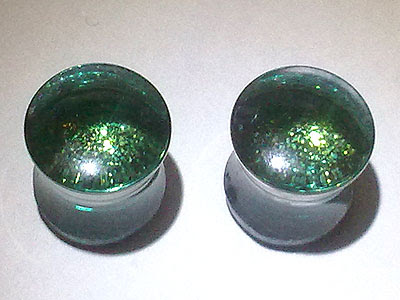 The plugs are 8mm double-flared clear acrylic, though I did have to sand the back flares down a bit as they were mahoosive. Once they were sanded to size, the rears were given three coats of Orly - Meet Me Under The Mistletoe then a top-coat of black to give the glitter a bit more oomph. The sanded-down bits were treated to a quick coat of clear nail polish to smoothen then up, as they tend to not go in otherwise.

Quite pleased with how they turned out, actually, and I'm not the biggest fan of the colour green (though I wouldn't say no to a pair of these galaxies in 0g). Going to try out some duochromes later this week, they'll hopefully look pretty badass.

Late edit: If you want to remove the polish use an acetone-free nail polish remover otherwise it will make your acrylic plugs go cloudy and :( Also, some polishes may discolour the acrylic, so you could be best off with some bog-standard glass plugs instead.
Posted by Missus Boot at Saturday, January 29, 2011