As I am now utterly determined to give up tobacco and smoking in general, I used last week's would-be fag money to get a Vapir 02 Mini vaporiser from Paradox as it's pretty portable and suitable for puffing on molasses as well as medicinal purposes if your into that sort of thing. Came with a free grinder as well, which was nice :) 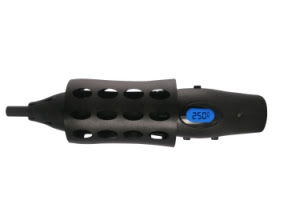 It works OK too, warms up quickly, doesn't stink that place out, has a handy digital temperature gauge and is just really convenient. It has a couple of optional extras as well, like a battery pack and car adapter which is handy should you ever be stuck in a field in the middle of nowhere.

My personal favourite thing about the O2 is that it has a little belt hook on it so you can hang it off your robes and pretend it's a light saber. I like to think that Qui Gon Jinn would approve of a light saber that dispensed vaporised goodies, he looks that type.

On the downside, the O2 looks like some form of butt-pluggy enema tool from outer space. It is a bit of a git to load, especially in the dark or if you have cack-hands, it feels very plasticy (though is apparently made of a nylon blend), and the power cord could do with being a bit longer but it is still nice to puff on whilst idly watching Jeremy Kyle at 2 o'clock in the morning.
Posted by Missus Boot at Tuesday, February 08, 2011