Welcome To My Gnome 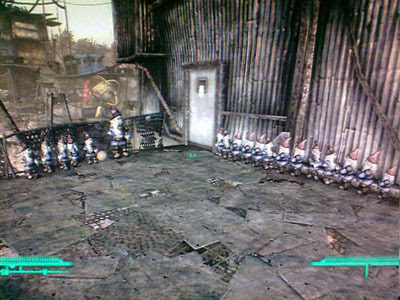 Someone asked me the other day about the collection of garden gnomes that I amassed in 169 hours of playing Fallout 3.

I have a group of damaged garden gnomes queuing up outside my Megaton Loveshack; there are 16 of the little buggers waiting there. I gave them a football to keep them occupied but they're not interested, they just stand there, like they think I run some sort of Fight Club or something. They ain't coming in though, they're far too tatty. This is a respectable establishment -- no damaged garden gnomes, no trainers, got it? 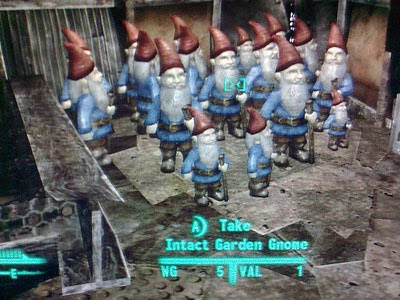 I let all 19 of the intact garden gnomes in because they don't look like they'll start any trouble. They don't get a football, they've got shelter, books, a jukebox and Wadsworth, the robot butler.

I did arrange the gnomes neatly on the stairs (which took bloody ages and ages and ages) but Wadsworth kept knocking them over, despite me telling him to keep the fuck off the stairs. Useless robotic butler, he is always knocking things over but never bothers to pick them up. WTF is that all about? Really, what does he do apart from occasionally provide some clean water and a nice cut and blow-dry? I've actually followed him around the house and he does absolutely fuck all. Useless. It's a good job he's unpaid otherwise he'd be sold for scrap.

BTW, this Fallout 3 blog is rather groovy.
Posted by Missus Boot at Wednesday, March 09, 2011