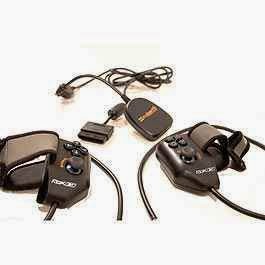 Oooodear, it's been nearly a year since my last post. I will remedy this with this bloggery o' shite.

<-- This is a Reebok Cyberfit. It's a clever old PS2/Xbox peripheral that goes nicely with a driving game or three -- what you do is pop it on your excercise bike, connect it up to your old PS2/Xbox, put on your driving game of choice (PGR2)  and pedal away. It uses a magnetic sensor (and wires, and all that stuff) to convert your furious pedalling into in-game acceleration and, there you go, you're pedalling round the Nurburging. Much better than a spinning class.

I had one, and it was awesome, but it got brokened. The magnetic sensor thingy got crushed and it was sad, but it didn't work with the 360 anyway so I needed a quick rubbish work-around as sitting there, pedalling on a bike whilst reading Twitter is pretty boring.

INSTRUCTIONS
It is a bit of rubbish work-around TBH, but it does seem to pretty much do the same thing on screen that the Cyberfit did on the Xbox. I still unconciously stop pedalling around corners and get a bit yay when I reach the finish line, so it's effective enough to cunningly fool my silly subconcious into thinking that it's actually a bit real, and it's better than reading Twitter.
Posted by Missus Boot at Friday, April 12, 2013