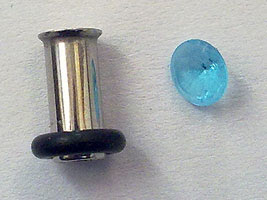 Watched Die Another Day (again, ITV were showing Bond films every five minutes) recently and thought that it would be a good idea to make some Zao plugs. If you're not a James Bond fan, Zao would be one of the film's villianous-looking villians, with lots of diamonds embedded in his face and it all looks rather damn cool. However, I didn't want diamonds in my face, I wanted diamonds embedded in my ears. I didn't have any briefcases filled with diamonds so had to go the simulated gemstone route.

I got some superglue and some cheap and cheerful stainless steel 8mm and 4mm tunnels, measured the flare on them (10mm and 5mm in this case) and got some gemstones of the same size from Fleabay. The total cost for each tunnel and gemstone averaged out at about £2.00 including delivery, which was nice, as I was being a right cheap-arse. 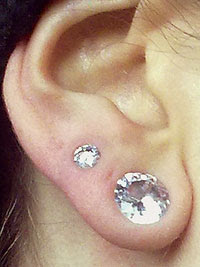 After getting the materials it was a seemingly simple matter of gluing the gemstone into the tunnel. This was quite a fiddly job, and was especially hard when I inadvertently glued my fingers to the tunnel and the gemstone adhered itself to my kneecap then fell to the floor, picking up dust, fluff and mysterious hair. Setting the gem in its final position right was also a right pain as the gluey gemstone preferred to stick to fingers rather that the tunnel. Patience, steady fingers and a good cup of tea were key here but sadly, I only had the good cup of tea and that went cold.

Once the gemstone was correctly installed it was left to set for about 24 hours, then the excess superglue was easily removed with some nail polish remover and a cotton bud. At last, they were to bung in me ears so I decided to bling my thing. In Sainsburys. Hell yeah!
Posted by Missus Boot at Wednesday, February 16, 2011