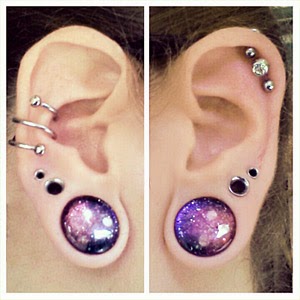 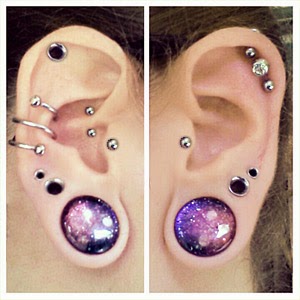 Going to bring this blog back to life by moaning about how I definitely need another ear stabbing in me right ear (pictured on the left, cos that's how I roll. 'Scuse the hair, it's hot and fuzzy). I like my piercings to be divisible by three, which isn't the case at the moment, so I need one more. However, I just can't decide what to get so I'm going to write a really boring post about my indecision.

An industrial would be AWESOME, but I can't be arsed to heal it. Not only that, but my ear isn't quite right for it anyway as it's got a sticky-out bit where the centre of the industrial would sit. Migration would be a definite thing. This would piss me off, as I hate retiring piercings. Bollocks.

Daiths are nice enough, but it would annoy the fuck out of me if it didn't line up perfectly central to the two conch piercings. Dem balls are fiddly as well, they will fall to the bathroom floor and get lost under the bath when I try to put the wee bastards on, because that is what they do. Then I may cry.

There's also a helix punch at maybe 6-8mm, but no-one does them round here and I'm not sure I want a big hole at the top of my ear when I'm 60.  :( I do, however, have some very nice 8mm glass pieces that'll look nice up there. Hmmmm ...

And then there's the tragus -- a tragus would also be pretty cool, but then I'd feel compelled to have one on the other side, which would ruin my divisible by three thing, unless I have EVERYTHING done.

Fuck it, can't decide, might have everything done. ALL THE PIERCINGS!
Posted by Missus Boot at Saturday, July 26, 2014